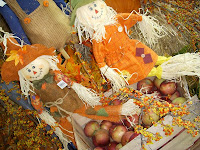 Mark your calendars and plan to join us at the Fall Festival at Bell Park Saturday, November 6. The weather promises to be beautiful and the food delicious. Lots to see and do. We'll be there to answer your questions about the Old Jail Museum Complex, the Society and all things historical. "I've Been to Jail" t-shirts and Key Magazines will be available for sale. And, of course, Louise and Vernon will have their homemade butter and churn. See you Saturday, November 6!
Posted by traveler at 2:17 PM

Lighting the Night: The Betty Lamp 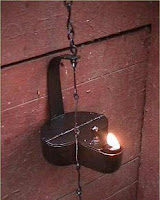 Ancient lamps, originally crafted of clay and, in later centuries, of iron, copper and bronze, burned grease, fish oil, or fat. The wicks were composed of twisted cloth scraps. When lighted, the lamps produced smoke and frequently dripped or spilled. The Betty Lamp was designed to eliminate the problems associated with these early lamps.

The Museum is pleased to have received the donation of a Betty Lamp. This lamp was the most commonly used lamp in America from colonial times until the 1850s, when it was replaced by the kerosene tubular wick lamp.
Posted by traveler at 1:07 PM 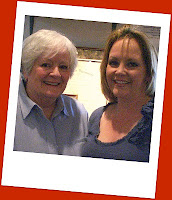 Luan Hearn Moore (left), past president of the South Sebastian County Historical Society and guest Polly Johnston (right), toured the museum today. Along with her many other contributions to the Society, Luan was instrumental in the development of the Coal Miner's Memorial, the acquisition of the Vineyard Log Cabin and served as editor of the Society's publication, The Key. Many thanks to Luan for her dedication to SSCHS and committment to the preservation of the history of South Sebastian County.
Posted by traveler at 6:29 PM 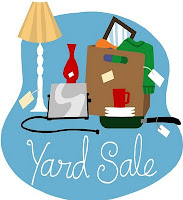 Join us on the Square for our annual Yard Sale, Saturday, September 18. All proceeds benefit the South Sebastian County Historical Society. See you there!
Posted by traveler at 12:33 PM 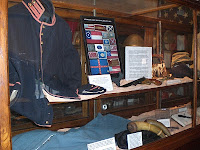 As autumn brings welcome rain and relief from the heat, we are reminded that a new year is just around the corner. With 2011 comes the 150th anniversary of the Civil War.
The Civil War exhibit at the Old Jail Museum is in its infancy. We are noted on the Arkansas Civil War Sesquicentennial Commission's website If you have family stories , documents or artifacts to share, please contact the curator. It is the Musesum's goal to share the story of South Sebastian County families during the War.

Our uniform, a centerpiece of the current display, is taking a few days off. It will return to the display Monday. Many thanks to Larry Puckett for loaning this- and other- items.
Posted by traveler at 8:32 AM

When The Old School Bell Rings

With the beginning of the 2010-2011 school year, thoughts go to the early days of education in South Sebastian County. The Old Jail Museum's document room has an exhibit of early school records, photos and artifacts. The Redwine Pioneer Schoolhouse evokes memories of the days when children of all ages were educated in a single room. The Schoolhouse contains items used by teachers and students and many photos of old county schools.

The Greenwood School District's website has an interesting history of education in the city.


Copies of Mr. Redwine's book, "When the Old School Bell Rings" are available for purchase at the Old Jail Museum. Open Thursday-Satuday May 1- October 31, 11 AM- 3 PM.
Posted by traveler at 8:17 AM