Recognize this building? It's Greenwood's old Dawson and Stewart Dry Goods and Mercantile. In its current incarnation, it's a single story structure and houses an antique shop.  This photo is our evidence that there was once a second story. It contained a theater that showed movies and hosted traveling shows. The movie poster in this photo says, " Neal Hart in a Two Reel Special Western Drama." Neal Hart was a star of silent movies in 1916-1919. The poster on the far left says, "The Dog Catcher, a Clever Bit." We think this movie could possibly have been the Walt Disney silent movie, "Alice and the Dog Catcher," made in 1924. Beneath the womens' hats in the window, is a display of kewpie dolls. This information leads us to the conclusion the photo was taken between 1916-1924. 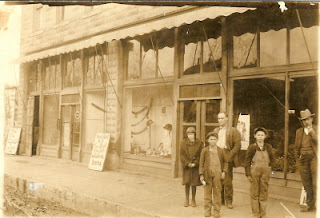 The Dawson-Stewart Building has survived two fires and the 1968 Category Five tornado that destroyed much of our city. Next time you drive past, envision it in its heyday, the screen door squeaking as it opens and Reba Dawson beckoning, "Hello! Come in!"
Posted by traveler at 6:44 PM

Please join us tonight for our monthly meeting featuring G. T. teacher Carrah Efurd's quiz kids. They are sure to entertain and inform. Word is that audience members may be drafted! In other matters, we'll provide updates on upcoming events (Buried Treasure, Fall Fest) and projects (Forgotten Cemeteries, Freedom Fest).

We thank you for your enthusiastic support of our programs and activities. Since we opened for the season in May, we've had 793 visitors!

Please forgive our recent absence. Duty called and we answered. We have been swamped with maintenance projects and repairs, the behind-the-scenes activity that isn't typically seen when you visit the museum and grounds, but that is necessary when you are caring for vintage buildings and artifacts.

We find ourselves this hot summer thinking about some forgotten and/or vandalized area cemeteries that have come to our attention. We are launching into a project with some concerned citizens, Historical Society members and volunteers to investigate their status and, hopefully, begin repairs and make a plan for on-going maintenance. The task will take a lot of organization and dedication. We'll be looking for volunteers. Stand by for future announcements.