Liberty Cemetery rests among the trees south of Highway 96 on the eastern edge of Greenwood. At one time, Old Highway 96 (now the northernmost lane in the cemetery) formed its northern boundary.  It looked much different in 1909 (see photo). Gone is the garden gate and gone are the fences and walls that marked family plots. 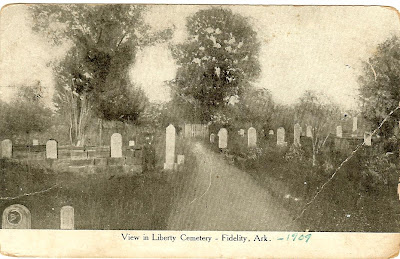 Join us Sunday, October 14 at 2 PM at Liberty Cemetery as we step back in time and celebrate the lives of eight Greenwood citizens You'll learn about the cemetery's history, a family's Civil War mystery, a family's Civil War tragedy, the workings of a pottery, how the city's first Boy Scout Troop was established and much more. Admission by donation. Proceeds benefit the South Sebastian County Historical Society.
Posted by traveler at 2:26 PM

Isaac's clouds cleared just in time for Saturday's tour of the battlefield on Devil's Backbone Mountain Ridge. Larry Puckett, in a woolen Federal uniform on this warm late summer day, was our guide. Beginning the tour adjacent to Stroud Cemetery on Stroud Road in south Sebastian County, he showed participants where the old Waldron Road passed through the valley and began its ascent into the mountains. It was over this military road that troops and wagons passed on that fateful September 1 so many years ago.

The battlefield is accessed via Boone Road or Nickeltown Road, but is located on private property. Heavily wooded and rock and boulder covered, it is a rugged site. One can imagine the challenge of drawing a wagon or riding a horse or mule over the terrain. It is said some families earned their livelihoods rescueing travelers and repairing their vehicles throughout the history of the road. (It was used as recently as 1930.) As Larry recounts the story of the battle, we can envision Rebels hidden behind every boulder. 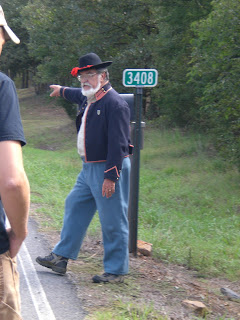 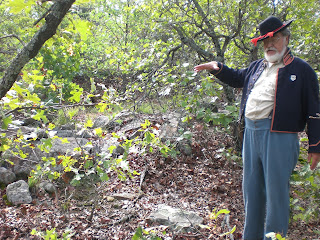 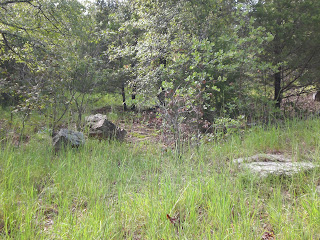 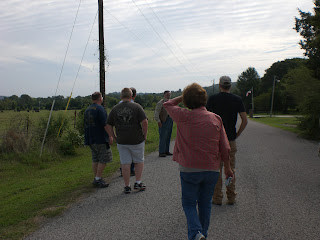