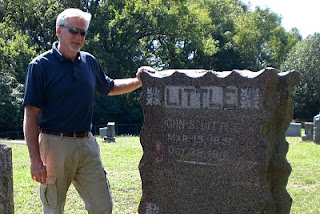 Historical Society members are busy preparing for their roles as some of Greenwood's most beloved citizens in the first annual "Buried Treasure" event. Doug Kinslow, pictured, will portray Gov. John Sebastian Little. Other citizens who will be memorialized include: Amy Jane Dawson Stewart, Jewell Bell, Charlie McNabb, Coach Miro Spicer, Mary Elizabeth Tatum Little, and Reba Dawson. SSCHS members participating include: Emily and Jim Mitchuson, Sue Edwards, Ken Edwards, Donna and Joel Goldstein, Louise and Vernon Stewart, Sue Lewis, Charles Efurd, Glenda Wallace, and Tom Martin.
SSCHS anticipates that "Buried Treasure" will become an annual event, allowing the lives and contributions of many of the city's citizens to be featured over the years. Plans call for additional cemeteries to be added.
"Buried Treasure" is free. Donation are welcome and any received will benefit the Historical Society. Please join us for an afternoon of fun and remembrance, rain or shine!
Sunday, October 16, 2011
2 PM
Greenwood Memorial (City) Cemetery
Greenwood, AR

Please join us tonight for our monthly meeting, featuring a presentation by Larry Puckett regarding the Battle of Devil's Backbone Ridge.
7 PM
Community Room, Farmer's Bank
Greenwood
Volunteers are asked to report at 6:15 for safety training and are invited to stay for the meeting. 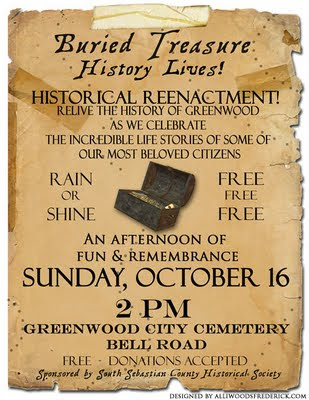 This our our first ever- first annual- "Buried Treasure" event at Greenwood Memorial (City) Cemetery. ~Informative and lots of fun.~ Hope to see you there!
Posted by traveler at 4:42 PM

We Have "Buried Treasure!"

History can be fun! Join us as we bring the history of Greenwood to life through the celebration of the lives and contributions of some of her most beloved citizens. Citizens featured in this year's event include Miro Spicer (coach), Reba Dawson (storekeeper), Amy Jane Dawson Stewart (postmaster), Elizabeth Jane Tatum Little (mother of Gov. Little), John Sebastian Little (Governor of Arkansas), Jewell Bell (citizen volunteer), and Charlie McNabb (prospector).
Greenwood Memorial Cemetery
Sunday, Oct 16, 2011
2 PM

Dusty Treasures in Our Barns 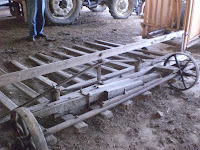 Many dusty treasures lurk in area barns. Last week we went out to see this buck or bull rake at an area farm. This sweep rake was powered by mules and used to collect hay from a windrow and transport it to a haystack or baler. Thank you to the family for giving us an opportunity to see how things were done in the not-so-distant past.