Thanks for a Wonderful Season 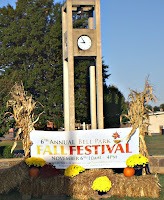 Thanks to our patrons, volunteers, Board Members and SSCHS members for a great 2010 Museum season. We'll reopen Thursday, May 5, 2011. In the interim, we'll be busy gussying up and putting together Civil War exhibits for next year.

Come see us at the Fall Fest next Saturday at Bell Park. We'll be glad to tell you about the Historical Society and the Museum Complex and will have Key magazines, tee shirts and books for sale.
Posted by traveler at 4:50 PM

A Big Thank You 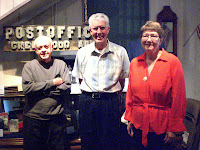 Did you know that Sebastian County once had 32 post offices? This is one of many interesting facts you'll discover at the Museum's Post Office exhibit.

Many thanks to Vernon Stewart, Homer Dillard and Brenda Pryor for the loan of their personal postal memorabilia during the 2010 Museum season. The postal exhibit featured old photos, information about and articles belonging to Greenwood and South Sebastian County postmasters and letter carriers, including photos of the first known letter carrier in the county and fascinating early carriers such as Lavaca's Joe Carruth.

Last chance to see this exhibit is Thursday-Saturday this week. The last day of operation for 2010 is Saturday, October 30.
Posted by traveler at 4:01 PM

The change of seasons brings changes to the Museum. Saturday, October 30 will be the last day of our 2010 season. We'll begin to clear out the current exhibits and prepare for the 2011 opening in May.

2011 initiates our nation's observance of the Sesquicentennial (150th Anniversary) of the Civil War and the Museum will be featuring the stories of families who lived in South Sebastian County during that difficult time. If you have a family story or a Civil War era artifact to donate or loan, please contact the curator via the link on this page.

During the period that the Museum is closed, we can accomodate your requests for information and the purchase of Key Magazines and other Museum publications. We can typically make arrangements for you to do research in the Document Room or view parts of the museum collection. For more information, contact the curator via the link of this page.
Posted by traveler at 10:23 AM

With last week's parent-teacher conferences, we are reminded of the old schools of Sebastian County. The Sebastian County website at Rootsweb has a wonderful collection of photos and information. You can see more at the Old Jail Museum's Redwine Pioneer Schoolhouse. Photos of area schools and pupils line the walls. You'll see the classroom rules and consequences for misbehavior that were posted to make any potential miscreant think twice. The portraits of Lincoln and Washington will remind you of your own school days. A jar of marbles recalls playground fun and the "little house" behind the school makes us thankful for modern conveniences.

The Museum sells two publications about early schools: "When the Old Bell Rang" and the 1998 edition of the Key Magazine. They are available for purchase at the Old Jail Museum.

The 2010 Museum season is drawing to a close at the end of October. Come see us this weekend and enjoy South Sebastian County History and the beautiful weather.
Posted by traveler at 8:32 AM